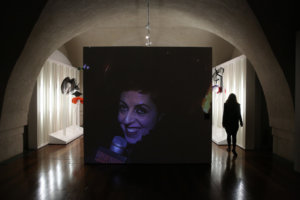 LONDON, ENGLAND – NOVEMBER 19: A video screen shows an image of Isabella Blow at the Isabella Blow: Fashion Galore! exhibition at Somerset House on November 19, 2013 in London, England. Presented in partnership with the Isabella Blow Foundation and Central Saint Martins, the show features over 100 garments from designers such as Alexander McQueen and Philip Treacy. Selected from the personal collection of the late British patron of fashion and art, the exhibition runs from November 20, 2013 to March 2, 2014. (Photo by Peter Macdiarmid/Getty Images for Somerset House)